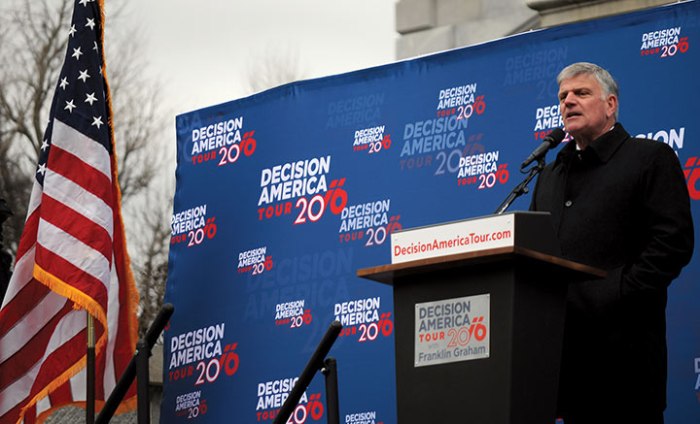 Thousands of people came out to the Columbia State House Tuesday to listen to the Rev. Franklin Graham speak about religion and politics. Graham urged Christians to get involved in politics and to go out and vote, regardless of party affiliation.

The Rev. Franklin Graham spoke to thousands gathered in front of the State House Tuesday, encouraging South Carolina Christians to participate in politics and vote.

Graham, the son of Reverend Billy Graham and a national spiritual leader in his own right, is making a 50-state tour to urge Christians to take a stand on issues.

“We see that our nation is in trouble; it’s in serious trouble. We’re in trouble spiritually, in trouble racially, economically; we’re in trouble politically,” he said. “No political party is going to be able to turn this system around.”

Graham, the son of the Rev. Billy Graham and a national spiritual leader in his own right, is making a 50-state tour to urge Christians to take a stand on issues.

“We see that our nation is in trouble; it’s in serious trouble. We’re in trouble spiritually, in trouble racially, economically; we’re in trouble politically,” he said. “No political party is going to be able to turn this system around.”

Carroll Stephens considers Graham one of the top spiritual leaders in the United States. He believes Graham came to Columbia to persuade people to vote for the presidential candidate that is following Jesus Christ.  For Stephens, that would be Texas Sen. Ted Cruz.

“To change America, we’re going to have to get a Christian in Washington, D.C. as a leader,” Stephens said.

Evangelical Christians make up nearly 60 percent of Republicans who are expected to vote in the primary, according to a Winthrop University poll. According to the results, one-in-five evangelicals remain undecided.

Andy Heen, 83, a devoted Christian since 20, thinks Graham wants what is best for the country.

“But a Christian president would be tarred and feathered today,” said Heen. “It is gonna take people turning back to God to change.”

Joey Werts, one of 25 members who came with his Baptist church, believes the biggest issue in the 2016 election is that America is moving away from its Christian-based foundation. Werts is undecided who to vote for but wants someone with Christian beliefs.

There are about 2.7 million registered voters in South Carolina. According to Graham, there were “20 to 30 million Bible-believing Christians” that did not vote in the last election.

Even though Graham believes there should be Christian men and women at every level of government, he said he refrains from endorsing candidates.

“I’m not telling you who to vote for, just vote and pray before you vote,” Graham, who heads up the international non-profit charity, Samaritan’s Purse, said. “Let the spirit of God guide and direct you.”

Clarice Smalley, of Springdale, is an enthusiastic supporter of Dr. Ben Carson, saying the physician Republican is her “first, second and third choice” for president. She said the only contribution Republican Donald Trump has made is to bring attention to issues such as border control.

Joyce Riggs, a member of Lexington Baptist Church since 1984, believes that a Christian leader is needed for the country. She does not believe Trump’s candidacy is based on Christian beliefs.

“He doesn’t have all the aspects that I look for,” Riggs said.

In her eyes, the country has fallen apart in the last seven and a half years.  She also supports Cruz who she believes he has a strong Christian background and is “calm and collected.”

Graham said the only hope for this country is the “almighty God, and urged “men and women of God to take a stand.”